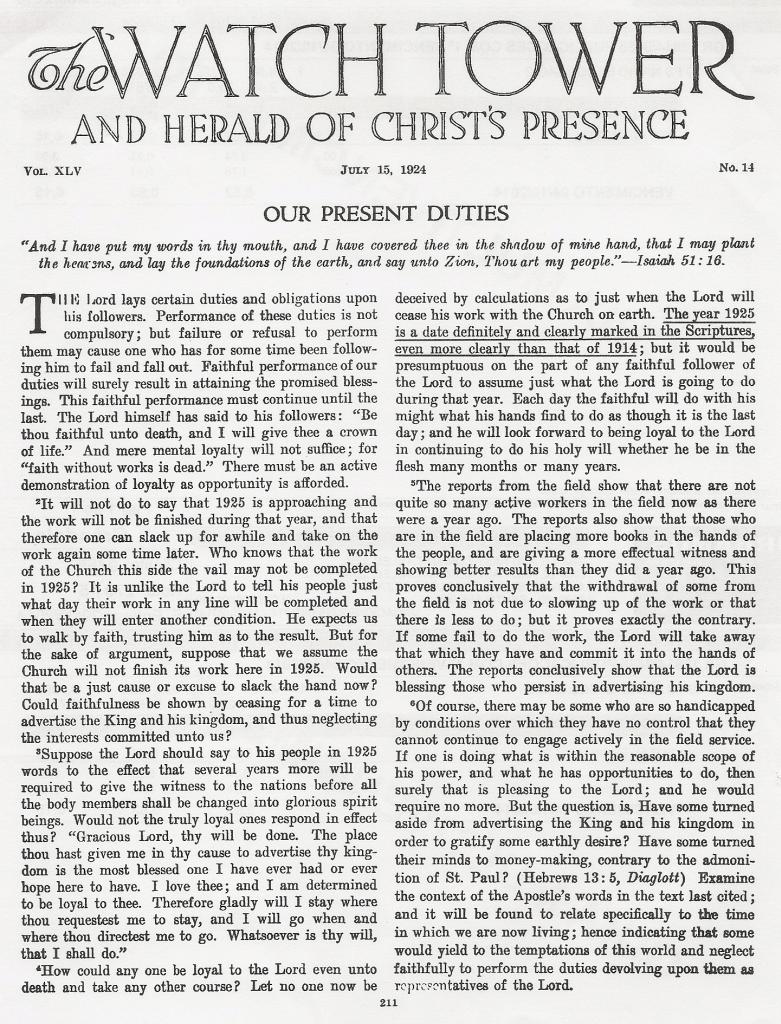 
The peculiar circumstance narrated of our Lordʹs curse upon a fig tree which bore no fruit, and which withered away directly (`Matt. 21:19,20`) inclines us to believe that the fig tree in this prophecy may be understood to signify the Jewish nation. If so, it is being signally fulfilled; for not only are thousands of Israelites returning to Palestine, but the Zionist movement, as all know, has now assumed such proportions as to justify Conventions of representatives from all parts of the world to meet year by year to put in practical shape the proposal for the reorganization of a Jewish state in Palestine. These buds will thrive, but will bear no perfect fruit before October 1914-the full end of ʺGentile Times.

Or, since the Master said, ʺWhen ye shall see all these things,ʺ and since ʺthe sign of the Son of Man in heaven,ʺ and the budding fig tree, and the gathering of ʺthe electʺ are counted among the signs, it would not be inconsistent to reckon the ʺgenerationʺ from 1878 to 1914-36 1/2 years-about the average of human life today.

Of these things none could know by any learning or wisdom of his own; but all who have the unction from the Holy One have faith in the power of God to say: ʺThere hath not failed one word of all his good promiseʺ (`1 Kings 8:56`); and these can with patience wait, and trust implicitly for future good things. In our previous studies of the subject* we learned that the ʺTimes of the Gentiles,ʺ which occupy the interim of time between the removal of the typical Kingdom from Israel and the full establishment of the true Messianic Kingdom upon the ruins of the present kingdoms, will end in October A.D. 1914. We have seen that the period of our Lordʹs presence from 1874 to 1914 is a ʺharvestʺ time, the earlier part of it for gathering his elect bride, and the latter part a time of trouble, for the overthrow of present institutions, in preparation for the new Kingdom.

All this is in harmony with the Scriptural declaration that the Kingdom of God must first be set up before its influence and work will result in the complete destruction of ʺthe powers that beʺ of ʺthis present evil worldʺ-political, financial, ecclesiastical-about the close of the ʺTimes of the Gentiles,ʺ October A.D. 1914.

Not until the full end of Gentile Times (October, A.D. 1914) should we expect the earthly phase of Godʹs Kingdom; for in giving a lease of dominion to the Gentiles until that date God made no mistake and his plans alter not.